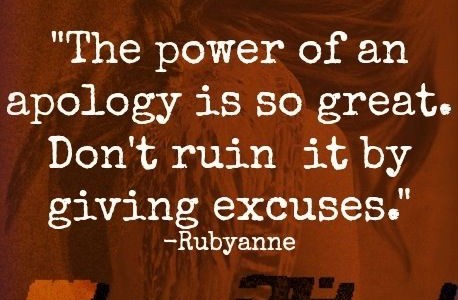 You are in conflict with someone and emotions are running high. Both of you are convined that you are in the right. This can lead to a breakdown in communication (needed to resolve all conflicts ), escalation of the issue and possibly a painful stand off that can permanently damage relationships (typical of family disputes).

Sometimes we forget that a genuine apology is a potentially great way, within your control, to help resolve conflicts and heal relationships. In reflecting on whether an apology is called for from you, think twice before concluding that all the wrong lies elsewhere !

If on mature reflection, you can see that there are things you might have done differently consider what they are and how your actions might have caused hurt for the other party. At this stage you need to place yourself in the shoes of the other person. If you feel that misunderstandings have arisen you may decide to talk to the other party, and this may be all that is needed.

If however, there is something for which you feel you need to make amends here are some pointers for how to proceed :

– Give a heartfelt apology. Be sincere. Only say what you mean. It should not be just a tactic to get a result.
– Show an understanding of the hurt caused by you
– Be clear as to what you are apologising for, it is not about taking the blame for everything unless this is the case of course !
– Be careful how you give any explanation of why you acted in the way you did. If you do this it should be said in such a way as not to take from the apology itself.
– Don’t refer to the wrongs you perceive as attributed to the other party.
– Be fullsome. If the apology comes across as begrudging it will only make the situation worse.
– Suggest a way forward at the end

There is no guarantee that the apology will be well received, but you will feel better for knowing that you have done your best to resolve the situation. There can also be a great release from negative emotions such as shame and guilt,  from owning up to your actions in this way.

Finally, consider giving the apology in writing (not always necessary), as you can be clear as to what you are saying, and you can ‘speak’ without interruption.