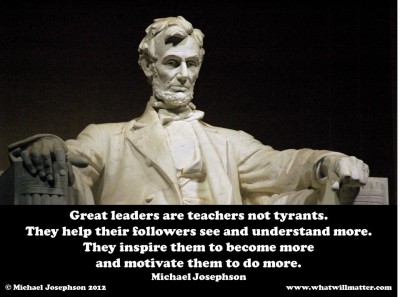 Below are some insights on leadership, inspired by Abraham Lincoln. They are relevant to anybody in a leadership role.

1. Take a long term view. Decisions that cause a lot of difficulty can be justified if they are consistent with achieving the ultimate goal. Leadership is not about popularity, at least in the short term, but about realizing a shared vision.

2. Timing is everything. Just because you are sure about the ‘right course’ does not mean that the time to act is now. You may need more time to win over some key stakeholders. A good leader knows that the circumstances must be conducive to a satisfactory outcome before acting, and accepts that some will view this ‘failure to act’ as procrastination and vacillation.

3. Know your ‘constituents’.  Stay close to and demonstrate affinity with those you are leading. Lincoln took regular soundings from whom we would today call the ‘grass roots’ and was guided as much by his assessment of the common mood amongst the people as by key political figures.

4. Communicate plainly and honestly in terms that ‘strike a cord’ with those whom you are leading. Lincoln had this common touch and had a way of communicating complex ideas is an easily understandable way which resonated with the values and beliefs of citizens.

3. Be independent minded. Listen to all perspectives but make up your own mind. As leader you are uniquely positioned to make balanced decisions based on consideration of all relevant factors.

4. Choose the best team. Value diversity and look beyond personal differences to ensure that you have the best management team in place.

6. Stick to your guns. Lincoln often took a long time to act but when he did he was resolute in the follow through on his decisions, and was not one for turning back. This built his credibility as a leader.

7. Own your decisions and those of your team. Lincoln showed great loyalty to those on his team, even when this was not reciprocated, and supported them when they were criticized.

8. Ignore personal animosity. Lincoln was regularly criticized for his actions or inactions but famously never took this criticism personally, always staying focused on the task in hard. He had a way of always seeing the best in everyone.